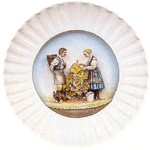 Guild trades started to function in century 15. - 16. On the territory of the town. Among first of them was a pottery guild. Its mission was to provide economic protection and support for its members, ass well as supervise the guality of ceramic products. The guild experienced its renaissance in 1994 when in the neighbor town of Modra a Guild of Slovak ceramistswas established.

Brickmaking
Even though industrial brickmaking production in Pezinok started in 1875, the first written mention concerning production of bricks in the town comes from 1615. From 17th to 19th century 2 brick plants could function in Pezinok due to suffcient amount of good quality material and richness of the town and its inhabitants. At the end of 19th century, however, both brick plants were closed. 1920´s and 1930´s were the Golden Age of Pezinok brickmaking. Pezinok brick plant was purchased by Mr. Stefan Kriser, entrepreneur from Vienna, who invested considerable funds into its enhancement and modernization. Brick making production currently continues in Pezinok.

Mining
First written records about mines in Pezinok go back to the beginnings of 14th century. The production of gold, however, was not profitable. For that reason at the end of 18th Century other minerals especially antimony, became the main focus of miners. Extraction of pyrite took place in Pezinok, which was

processed in the first factory in Austrian Hungarian Empire for production of sulphuric acid established in 1848 in Caila{part of Pezinok}. Ore Mines Pezinok were closed after 1989 due to the fact that the ore was not pure enough {50%} and the concentrate did not contain enough metal.

Huncokars Huncokars - holzhackers{Holz-wood, Hacke-axe} were Bavarian and Tirol woodpeckers, who came to the territory of Small Carpathy in mid - 18th century. They mainly dealt with production of timber in the woods of Small Carpathy. On the bases of specified conditions their duties included the following tasks: per one saw{two persons} they had to produce 800-1200 m3 of timber yearly, planting of saplings, taking care of forest pathways, transporting timber, burning lime or wooden coal. Since they had German army in the 2nd World War and after the war most of their families were deported to Germany.