Old City Hall, Radničné square and M. R. Štefánika St.,
phone: +421(0)33/641 23 06
It was built from a building belonging to Town spa and to a Weltz house after granting of first town privileges to Pezinok in the first half of 17th Century. The building was considerably damaged by fire in 1832, whitch destroyed a part of town archive. After the fire the building was rebuild in classicist style. The town hall currently houses the City museum and Ján Kupecký Gallery. 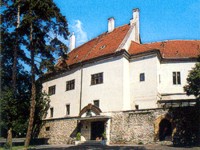 The castle was originally a Gothic fortress built at turn of 13 th an 14 th by Counts from Svätý Jur and Pezinok. After their death the castle had different owners (baron Krušič, count Illesházy, Pálffy family). In 1875 a lightning caused extensive damage to its nothern part, which fell apart and a new building was built at this place. In 1931 the town purchased the castle and sold it to Slovak Vintner Association in 1936. Currently it is the property of the Vintner Company and inside the castle is surrounded by a park which was created by Count Francis Pálffy in 1884 in the style of an English garden. Within the park are rare trees and a fishing pond with water fowl. 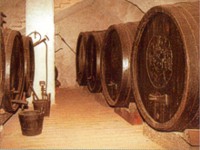 Small Carpathian museum,  4, M. R. Štefánika St.,
phone: +421(0)33/641 33 47
It is located in a Renaissance burgher wintner house from 1739. It includes the following parmanent expositions: History of Pezinok (from its first written mention, history and of the city of Pezinok, feudal justice, handcrafts and guild tradesof early Pezinok and ethnology) and History of wine production and Grape cultivation in the Small Carpathian region (with a big collection of winepresses). 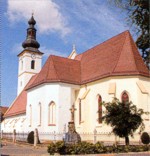 The church vas constructed at the beginning of 14th century. An old Romanesque church or a chapel from 13th century might have been at this place before. Originally the church had no tower. Its vaults were constructed at the beginning of 15th century in late Gothic style.
Inside is a rare Renaissance baptismal font dating from 1523, a font from red marble, epitaph of Count George from Pezinok from 1426 from red marble and burial chapel of Stefan Illeshazy. In 1674 the church became the property of Capuchins, after tht Protestants and the current owner of this church is Catholic church.

Lower Church, Holuby Street
The church vas constructed from 1655 to 1659 by Protestants, in 1674 following the order of Archbishop of Ostrihom it was handed over to Catholic church. The church has an interesting altar with pictures of Transfiguration and Holy Trinity. Notable as artwork are the organ with unique wooden organ pipes and wall paintings created by the Pezinok painter Augustin Bárta senior in 1942 – 1943.

Capuchin church and Cloister, Holubyho Street
Capuchins started to construct this church in 1719. It has a simple architecture and internal decoration. The only colored parts parts are altar pictures from J. Kuch. From 1950 to 1954 it was a punitive place for priests and monks which were inconvenient for Communist regime. Currently elderly priests are accommodated in the cloister.

Lutheran Church, Potočná Street
It was built 1783, it is a first building constructed in Pezinok in classicistic style. It has a simple archutecture, it was originally without a tower. The tower was constructed later between 4857 and 1860 in neo gothic style. The most precious works inside the church include a relief of resurrected Christ from 1662 and the painting of the Last Supper, which is attributed to the prominent Baroque painter Ján Kupecký, a native of Pezinok.

City Fortifications, The rest of the walls are to be found on Záhradná, Moyzesova, Hrnčiarska, Mladoboleslavská and Š. Polkorába Street
It was the early city defense system, which was built when the town was issued the charter granting Pezinok the status of free royal town. The fortification had three gates and eleven bulwarks. The walls were made of anaclastic stone and were 6 meters high, at their foundation they werre 180 cm wide at the top 100 cm. In front of the wall a moat was dug out which was 12 – 14 meters wide and 2 – 4 meters deep. The fortifications started to be dismantled in mid – 19th century when a synagogue was built from its material.

Mary´s Column, Radničné sguare with the statue of Immaculata
It was built in 1749 by unknown mason on the order of Ján Schmidt. It is a votive construction, which probably refers to great fire or the end of epidemics. The Column was reconstructed in 1898, in 1954 it was dismantled and placed into the deposits of museum. It became a part of the square in 2001 after extensive reconstruction.

extensive mill out of 15 mills, which used to exist in the area of Pezinok. It is composed of a complex of buildings which are situated around a closed court. It is the only mill in Slovakia which has been completely preserved on the place where it had been built. It is the property of Slovak National Gallery, which carried out the reconstruction and made it functional. It established a Gallery of Naive Arts, which is the first one in Slovakia of this kind.