territory of current Pezinok is for the first time referred to as "terra Bozin" in a document from 1208. In the following centuries the town gradually changed from a mining settlement into a vintage town after the second wave of German colonization at the beginning of 16th century. The efforts of the town and its citizens to get the privilege of a free royal town were cowned with success on June 14, 1647 when the King Ferdinand III. granted this privilege to Pezinok.

In the 17th and 18th century Pezinok experienced its biggest boom and was one of the richest towns in Hunarian Empire. Its fame and richness were based on the production of high-quality wines. In 19th century various industries started to pour into the town. A first factory fot the production of sulfuric acid in Hungarian empire was established in Pezinok, as well as a plant for production of needles and a big brick plant. The economic boom in 19th century was mainly caused by revival of gold mining in the area of Pezinok and the launch of railway, which made Pezinok the most important town in the Small Carpathian Vintage area. An econom 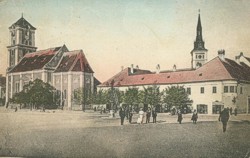 ic decay was a typical feature of the first half of 20th century. At that time there was no major industrial company in Pezinok and wine production went down as well. The consequance was a massive immigration to the United States. After the end of World War II a continuous improvement started. Today's Pezinok is a modern district industrial town (especially for production of blirks, processing of timber and construction) with a vintage and wine production of high quality, developed trade and interesting historic sights.